It takes a mere 60 seconds inside the Pro Patria and Res Publica Union headquarters to realize that times are changing.

Members of the conservative political party scurry across the main office in downtown Tallinn, Estonia, walking quickly with a clear need to be somewhere. Audio from America’s first-ever political attack advertisement can be heard from a nearby room — a potential preview of the party’s approach in the near future.

The advertisement, known commonly as the “Daisy” ad, ran only once in the United States in 1964 as part of Lyndon B. Johnson’s campaign against opponent Barry Goldwater, and ushered in a new era of negative crusading. The sound of the video filters over frosted-glass doors into the main room, contributing to a frenetic energy that fills the first floor of the building.

The party is scrambling to recover after being forced out of the government’s partnership.

Estonian Prime Minister Andrus Ansip relinquished his role as the leader of the Baltic nation in early March, a move that wasn’t surprising in nature, but nearly earthshaking in timing. The 57-year-old Ansip, the nation’s leader since April 2005, submitted his resignation to President Toomas Ilves on March 4, leaving Ilves two weeks to nominate his successor. The decision was a strategic one, made in an attempt to refresh the party’s reputation in the general public, one year before Parliamentary elections determine the future of Estonia.

“The prime minister resigned, and it meant immediately that there is governmental crisis,” said Marianne Mikko, Social Democratic Party member of Parliament.

In the Republic of Estonia, and in many other similar parliamentary governments, the political battle isn’t waged between two powers like it is in the United States. Instead of Democrat or Republican, cut and dry with a few outliers serving mostly as satellite members of the two giants, Estonian politics are a fight to make friends — sort of.

Four main parties are represented in the nation’s parliament, known as the Riigikogu: the Pro Patria and Res Publica Union (IRL), the Estonian Reform Party, the Estonian Centre Party and the Social Democratic Party. Elections determine how many seats each party will occupy in the Riigikogu, and it’s common for the party with the highest majority to align with the closest in representational size, thus creating a majority and coalition. The two parties’ views may not always align, but they unite for the purpose of power in numbers.

In the former coalition, assembled at the start of Ansip’s third term as prime minister, the Reform Party and IRL joined forces in a center-right alliance. It left the Centre Party and Social Democrats in opposition, but less than three years after the government was formed, Ansip was vacating his post, and walking out of the coalition ahead of him were members of the IRL.

As with almost any member coming out on the losing end of a struggle,  the IRL party members are clearly not happy about it. 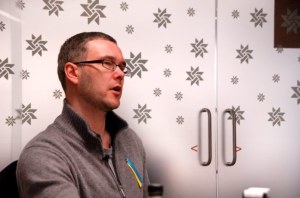 Veiko Lukmann, international secretary of the Pro Patria and Res Publica Union, talks during an interview at the party’s headquarters in March in Tallinn, Estonia. (Photo by Kathryn Coduto)

“We saw some signs at the end of last year,” said Veiko Lukmann,   international secretary of the Pro Patria and Res Publica Union. “It wasn’t such warm interaction with people anymore, and now we have found out that they had the plan to throw us out of government for some time, and it is purely for political reasons.”

Lukmann didn’t stop there though, making sure to get in a few jabs at their former partner, as well as provide some optimistic self-promotion for his party.

“Of course, our results in local elections have been very good, which was a bit of shock for them,” Lukmann said. “They have been in power and been very popular party for quite some time, so I think it’s a move that has been made in order to increase their popularity.

“We were in the government together for eight years I think, so it has really been a long time. They think people get tired of seeing the same faces, and they want change. The Reform Party, they want to be a high-rated party, so for them it’s really important to make a change so they’d preserve their face. ”

Ansip’s resignation has opened the door for the inclusion of a minority member of Parliament in a new coalition, formed between Ansip’s Reform Party, which held a position of power in his nine years — and for much of Estonia’s parliamentary history — and the new addition, the Social Democratic Party. That left the IRL, the nation’s most-conservative party, on the outside looking in, knocking down a longstanding barrier with which progressive politicians have been struggling for years.

The amount of time before that barrier is erected yet again, however, could be as little as 11 months.

The new coalition, led by 34-year-old prime minister Taavi Roivas of the Reform Party, has a small window of time to make a significant amount of change, if it so desires. The new leader of Estonia was authorized to form a new government on March 24, and his members took their oaths of office two days later. Elections for the 13th Riigikogu are set for March 1, 2015. The youngest governmental leader in the European Union has either a fantastic opportunity ahead of him, or a daunting task, depending on who you ask. 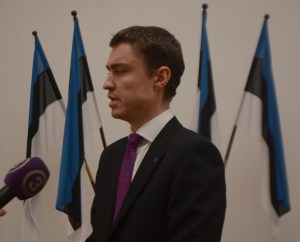 New Estonian Prime Minister Taavi Roivas speaks with reporters in the Riigikogu building in Toompea Castle moments after Roivas was authorized by the Riigikogu to form a new government, March 24 in Tallinn, Estonia. (Photo by Jacob Byk)

Roivas may be young for his position, but he’s no stranger to politics in Estonia. Roivas served as the Minister of Social Affairs in Ansip’s third cabinet, and before that was an advisor to Ansip, as well as a member of Tallinn city council and the Riigikogu. His coalition is expected to get to work quickly and aggressively, likely championing progressive changes in both social and economic policy that will appear to be a sudden turn for the better, a break in the dark clouds that hung over the nation.

But when speaking with Enn Eesma, Estonian Centre Party deputy chairman, things weren’t really all that bad. The move, in fact, is more based on dragging political ratings out of the depths of third and fourth — out of four places — and the ensuing legislative change is mainly driven by a desire to accumulate votes in the March 2015 election.

“It was a surprise because there was not, in my opinion, a big reason to [resign],” Eesma said. “In our party’s opinion, this is perhaps more like a rescue operation because the rating of the Estonian Reformist Party is not good today.  … Most of all, the problem was the coalition rating was almost 15 percent lower than the opposition parties’ [Centre Party, Social Democrats] rating.” 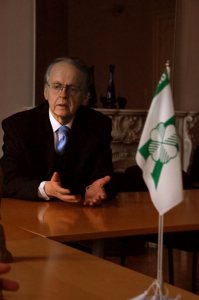 Enn Eesma, Estonian Centre Party deputy chairman, talks about the resignation of Prime Minister Andrus Ansip on March 25 at the party’s offices in the Riigikogu building in Tallinn, Estonia. (Photo by Kathryn Coduto)

In a move that screamed “if you can’t beat them, join them,” the Reform Party abandoned traditional political lines, straddling the center to join its right with the Social Democrats’ left. But as the decision may have been motivated more by votes than by actual reform, the inclusion of the Social Democrats has encouraged many progressive minds, including Eesma, whose party is ideologically similar to that of the Social Democrats.

“The program, the new cabinet of ministers, is quite optimistic,” Eesma said. “As a member of opposition, I’m glad that the program is more social oriented than it used to be, thanks to the Social Democrats. Some of their ideas have been the ideas of my party, but they were never successful because of the tactics of coalition.”

Unlike the United States, in which the average citizen is more likely to care about the latest celebrity gossip than political news, it seems as though every citizen is well aware of the change within the walls of Toompea Castle.

One of those citizens tends bar in a local hostel on a brisk March afternoon, tucked into the upper floors of a building just blocks away from Parliament.

Her name is Lissette Kampus, a gay-rights activist working at The Monk’s Bunk in Tallinn. 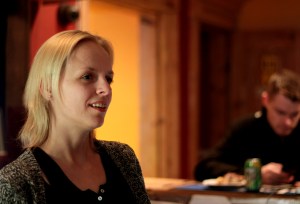 Kampus is happy to talk about the progress of European politics and its slow creep toward Estonia, which has lagged behind other EU nations. A co-habitation bill was set to be introduced in Parliament on March 20, but it was postponed because of what Kampus called “internal fear” within the coalition, which included the IRL.

Kampus called it discouraging, believing the more time it takes to be introduced and debated, the less it will accomplish for same-sex activists.

This could be the roadblock that legislators encounter repeatedly in the short 11 months ahead of them.

The EU itself has a direct impact on the events of the coming months, too. The union’s elections, set for May 25, will provide a preview of the political climate in Estonia, and impact the amount of latitude Roivas’ government will have prior to March 1.

Ansip’s resignation didn’t end in him riding off into the sunset of early political retirement, either. According to a Bloomberg story on the situation, Ansip is interested in the job of European Union transport commissioner. He would take the position occupied by Siim Kallas, who is also the former prime minister of Estonia from January 2002 through April 2003, as well as a former member of the Riigikogu. Kallas was also approved by the Reform Party to take Ansip’s position in the case he would resign, but he later chose not to pursue the position because of what Eesma called “a severe attack of Estonian media against Kallas.” 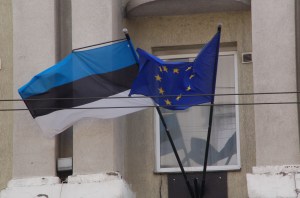 The Estonia flag flies next to the European Union flag above a building doorway in downtown Tallinn, Estonia. (Photo by Nick Shook)

“It’s one of the ways to analyze this that his opinion of becoming Estonian prime minister in such a situation where everybody, so to say, was attacking or criticizing him was quite impossible,” Eesma said. “He thought that his possibilities to do his job were narrowed. There were evidently other reasons, but then there were other candidates to take this position as prime minister.”

This leaves Ansip in a state of limbo, the odd man out in what was perceived as a job swap. But he has returned as a member of Parliament for the Reform Party.

Depending on the results of the EU elections, activists for progressive reform such as Kampus will either be able to turn to possibility of future brighter days, or be prepared for an 11-month tease before again falling behind the political barrier against which they’ve crashed for years.

No matter what, time is of the essence, and for politicians and activists alike, there is no time like the present to get to work.